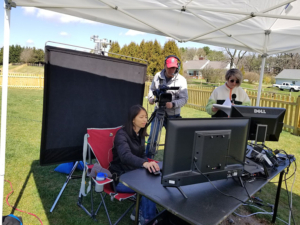 MTI was on hand to record the winning team in the First Responder UAS Triple Challenge, a prize competition for drone enthusiasts designed to create more unmanned devices that can better help first responders in a variety of emergency situations. Sponsored by the National Institute of Standards and Technology‘s Public Safety Communications Research Division and Kansas State Salina and Mississippi State University, the $40,000 first prize went to Team AMAV from the University of Maryland. Team AMAV also won the First Responders’ Choice Award of $5,000.

Originally, the shoot was to occur on a different day and location in Maryland, but weather conditions forced a change–to the home of one of the team members, Riley Dove. Because of the change, several members of the team could not be on site for the actual competition, but Dove, Caitlin Windland, and Rebekah Yang led the demonstration while the MTI team captured the process. Dove launched the drone; Yang handled the remote coding, and Windland narrated what the team’s new technology was doing. Being open to last-minute change of plans is always the best plan. 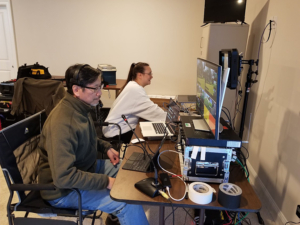 It takes a lot of laptops to keep this production flying: Director Ben Wong and Streaming Tech Anni Wong at the controls.

Director Ben Wong and Streaming Tech Anni Wong set up a control station inside the house, while cameramen Shawn Chadwick, Jamie Sides, and Terry Campbell each shot the demonstration outside, under the direction of Production Manager Dave Lilling.

All of the cameras were Panasonic AGDVX 200s. The reliable Behringer x32 audio board and wireless microphones captured the sound, and Aputure lights helped bring everything into focus. Inside, the BlackMagic ATEM 2 switcher and the Macbook Pro were used for encoding and streaming.

You can watch a video of the winning demonstration here. 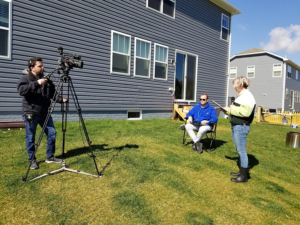