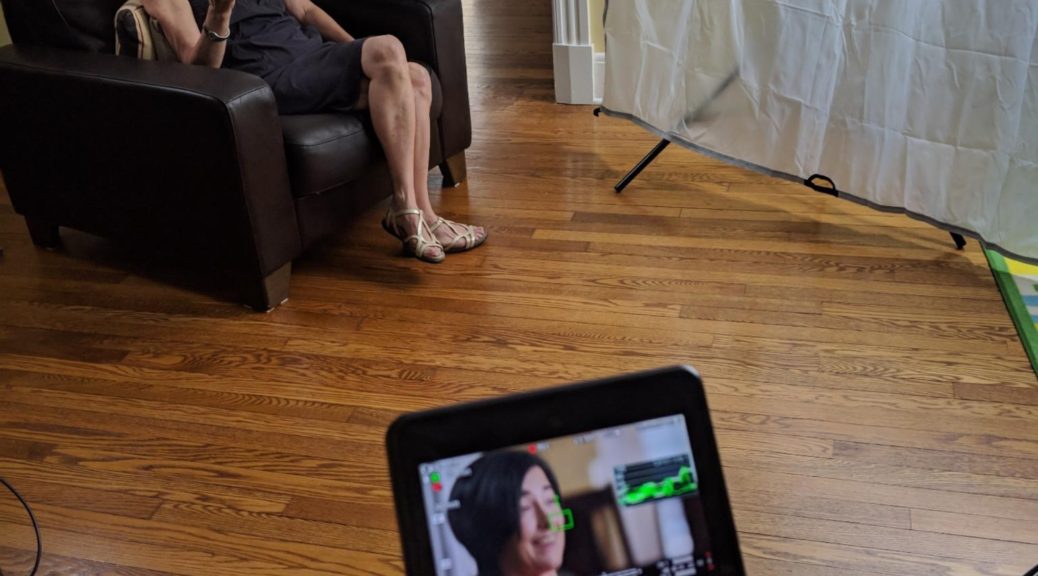 This was a 2 camera shoot for Edelman Chicago, MTI supplying 2nd camera Jamie Sides and a Canon C300 Mark II. Steve Epstein supplied audio.  The job involved an interview and B Roll. Oliver Peng was the lead DP. Lite Panels were used for the interview and accompanying B Roll for the full day shoot.

The interview was shot at 17 Witherspoon Rd in Baltimore. The tech scout was completed the day before the actual shoot.

Catie Connor was the producer on site for Edelman Chicago. Hair & makeup (Starmakeup studio) and a PA (Ron Liu) were also part of the crew on site. MTI was contracted by Assignment Desk out of Chicago. The audio on the shoot included the standard mixer, boom and lavalier microphones. MTI has worked with Assignment Desk on a variety of video production jobs over the past 5 years

The end client on the job was Taltz. Taltz (ixekizumab) is a biologic injection for patients with moderate to severe plaque psoriasis (PsO) or active psoriatic arthritis (PsA). This was a patient story for the company.

MTI supplies video production which can include video and camera crews across the DMV region.  We are now in our 30th year of operation and also provide live streaming for Facebook and YouTube as well as multi camera switching.  In addition MTI produces videos for Fortune 500 companies, associations and  non-profits.

Edelman has more than 60 offices nationwide including offices in New York, Chicago, Washington and Los Angeles.

The Washington Capitals are attempting to defend their Stanley Cup Championship.  If they defeat the Carolina Hurricanes then they will host the New York Islanders.  On the last Saturday of the season, Tony Winthrop supplied video production for MSG.  Winthrop was the locker room Cameraman for MSG on their pre game skate as well as the postgame coverage in the Islanders room.

Winthrop used a Sony XDCam 800 with camera light and wireless microphone.  MTI has worked for MSG for the past 12 years with video services in the Washington DC region.  We have worked on the MSG telecasts of the New York Rangers and New Jersey Devils

When the game is completed as soon as the Islanders open the locker room, Winthrop accompanies Shannon Hogan to begin the post game process.

MTI is currently in its 30 year of operation providing video production in the Washington DC region.

We work with a variety of gear from Sony XDCAM to Canon C300 Mark II, Sony FS 7’s as well as the Panasonic AGDVX 200.

With the Islanders already in the 2nd round via their sweep of Pittsburgh, they will be well rested to take on the Caps.   Games One and Two will be at the Capital One arena, with an off day in between. Games 3 and 4 will be in Brooklyn at the Barclays arena.  Game 5 will be back at the Verizon Center, Game 6 returns to Barclays if needed and the final game of the series will be hosted by the Caps 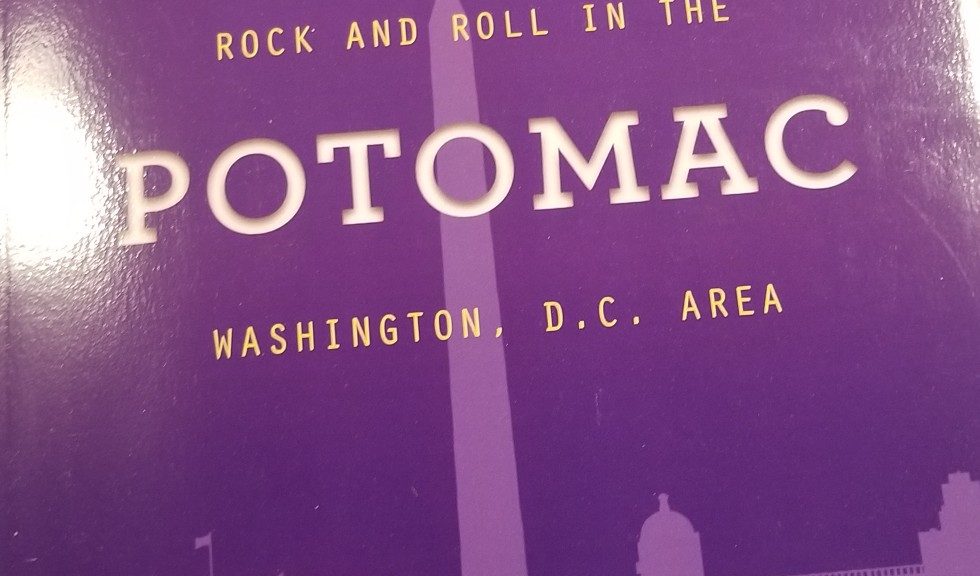 In 1998 the legendary Bayou Nightclub closed after 45 years of operation. It featured the 1st club show in the United States of U-2. The Dave Matthews Band played the club many times in their early days, and Hootie and the BlowFish regularly was featured at the club. Foreigners 1st club date was also at the Bayou. The club also showcased a rare small venue date by KISS

In 2013, Metro Teleproductions Inc produced a film called “The Bayou, DC’s Killer Joint” which first aired on Maryland Public Television, then on WETA, WHUT as well as 90 PBs affiliates. The 87 minute documentary which was Produced and Written by Bill Scanlan, Vinnie Perrone and Dave Nuttycombe, graphics by Dick Bangham of Rip Bang Productions, edited by Bill Parks of Dominion Post was seen by over 100,000 viewers across the country. It was nominated for a local Emmy Award and won a documentary award from the Kingston Film Festival in New York. MTI provided all of the video production on the film, camera crew video crew etc

Mark Opasnick has just written “ROCK THE POTOMAC”, a comprehensive history of popular music in the the Washington DC area from Colonial times to the end of the Vietnam War in 1975. ROCK THE POTOMAC has a chapter on the Bayou .

Metro Teleproductions Inc, started production on the film 2 months before the closing of the club. We shot many acts making there final appearance at the venue which was located at 3135 K St NW in Washington DC. Author Stephen King’s Rock Bottom Remainders, which featured Amy Tan Dave Barry, Simpsons creator Matt Groening. The final performance on December 31st 1998 the headliner was the group “Everything” which had a hit single “Hooch” which was featured in the Adam Sandler movie “Waterboy”. The single cracked Billboards Top 10

MTI documented the final days of the club and spent years interviewing artists such as Dave Mason, Meatloaf, Paul Kantner. It was truly a labor of love.

Dr. Mark Terris is an American born whose family moved to Israel when he was in high school. He then joined the Israeli army. At age 18 he then started taking notes about his experience in the military.

35 years later he finished the book and published it.  Its called Bullets to Bandages.  Xlibris  provided the publishing platform. MTI provided video production services by editing a promotional piece for the project.
The video link is https://vimeo.com/manage/308088323/general

The Israel Defense Forces (IDF) is a renowned fighting force. It has defended a young vulnerable country from repeated attacks. In the process, it has produced great generals and statesmen. Bullets to Bandages is set in the late 1970s, at a time when many Western armies viewed the IDF as a heroic and idealistic force.

Bullets to Bandages explores the daily life inside the Israel Defense Forces. These are true stories that center on the experiences of four Israeli soldiers–me and three close friends–and provide the reader with an intimate view of life in the Israeli army, the meaning of army friendships, and our own coming-of-age.

Life in the IDF is in many ways similar to other armies with a lot of chicken shit–annoying military nonsense. Good shoe-polishing skills are valued over combat readiness. Soldiers are chronically sleep-deprived, often standing for midnight inspections and enduring nightlong stretcher marches. And yet there is a more humane side. Everyone, regardless of rank, is addressed by his or her first name. Commanders lead by example, not by threat. Beneath the uniform, soldiers are eighteen- to twenty-one-year-old men and women, still fighting acne and constantly fantasizing about sex.

You will witness the induction experience, which transformed us from teenagers into serial numbers. Other experiences included basic training (paratrooping, artillery, and air force), with the unique traditions of each corps. We evolved from new recruits, to sergeant-major slaves, to combat medic students, and finally to commanders. Along the way, we internalized, accepted, and eventually perpetuated the IDF’s traditions.

Life in the Israel Defense Forces is not always fun. The physical hardships are real, and the stress challenges your resolve and morale. As young men, we did not verbally express our feelings, which were often tainted by our raging hormones, but broadcasted them through our actions. Humor and friendship allowed us to thrive in this environment. We matured and ultimately put our hearts and souls into the Israel Defense Forces, and this is the true secret behind the IDF’s success.

Terris recently did a national book tour, which  covered the East coast to the West Coast

MTI Videographer Tony Winthrop out at the Capital One arena in Washington DC. Tony providing  camera coverage for Madison Square Garden Network – https://www.msgnetworks.com/.  Tony was covering the New Jersey Devils at Washington Capitals for  MSG. For these types of jobs it’s a 1 person camera crew for ENG type news shooting.

Tony’s primary responsibility is to shoot interviews during the pregame skate at the Capital One  arena.  The pregame skate occurs in the morning, Quick hand held interviews are shot either in the locker room  or just before the players go on the ice, or when they are coming off.  Tony used a Sony XD Cam F800 Disc Camera, with a battery light on the camera.  For the interviews an RE 50 stick microphone with a Sony wireless was provided.

The interviews are conducted either by the Associate Director Larry Gaines or the Producer Roland Dratch or the newest member of the Devils broadcast team Erika Wachter https://www.msgnetworks.com/2018/09/12/msg-networks-names-erika-wachter-as-new-host-for-new-jersey-devils-coverage/   MTI specializes in camera crew and video crew work of this nature, we are credentialed for the Senate Radio TV Gallery.

Depending on the game, normally soundbites from various players can be clipped together in a soundbite package that airs in the half hour pregame. For the postgame, Tony works closely with Erika concentrating on the Devils locker room starting with the Coach John Hynes . Discs are popped out and ran back to the truck. Normally the coach interview is played in its entirety.  During that time Tony and Erika are in the Devils locker room gathering short interviews from players. Those interviews are played back in the post game

Ryan Houseman, Webcast Director and Shawn Chadwick were the video crew for MTI.  2  different webcasts were live streamed out of the German Marshall Funds DC Headquarters in Downtown Washington DC. The Webcasts were streamed out simultaneously on FB and YouTube For the video production MTI used a Panasonic AGDVX 200, Sachtler Tripod and webcasted/live streamed the events to Facebook and YouTube with Apple Macbook Pro Encoders.

The morning session  covered the funds  Understanding America project,which featured a conversation with  Bill Kristol and Neera Tanden on the future of the Republican and Democratic Parties following the midterm elections. The conversation was moderated by Juliane Schäuble, and it examined  current dynamics in both parties, unpacking the political sentiments driving politics in the United States today. The discussion also touched on how these trends will impact a U.S. transatlantic agenda and future foreign policy engagement.  The video on demand link   https://www.youtube.com/watch?v=Vhnu__Xadjg&t=11s

The afternoon session  featured Senators Ron Johnson (R-Wisc) and Jeanne Shaheen (D-NH) which covered the topic
Analyzing Russian Interference Operation Across Time and Space: Launch of a New Interactive Tool  The video on demand Facebook Link can be found at  https://www.facebook.com/gmfus/videos/201735097396392/

MTI is in entering its 29th year of operation.  The company has been supplying video services in webcasting since 1998.  MTI works with a variety of associations and non profits on a regular basis

The German Marshall Fund of the United States (GMF)  http://www.gmfus.org/ strengthens transatlantic cooperation on regional, national, and global challenges and opportunities in the spirit of the Marshall Plan.

GMF contributes research and analysis and convenes leaders on transatlantic issues relevant to policymakers. GMF offers rising leaders opportunities to develop their skills and networks through transatlantic exchange, and supports civil society in the Balkans and Black Sea regions by fostering democratic initiatives, rule of law, and regional cooperation.

Founded in 1972 as a non-partisan, nonprofit organization through a gift from Germany as a permanent memorial to Marshall Plan assistance, GMF maintains a strong presence on both sides of the Atlantic. In addition to its headquarters in Washington, DC, GMF has offices in Berlin, Paris, Brussels, Belgrade, Ankara, Bucharest, and Warsaw. GMF also has smaller representations in Bratislava, Turin, and Stockholm.