Getting the Job Done

Getting the Job Done

Producing A Full Video In a Tight Spot and Time Frame 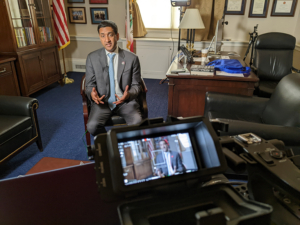 Time and space were tight when filming U.S. Rep. Ro Khanna (D-CA) in his congressional office.

MTI got the call from London-based production company Silverfish TV to interview Congressman Ro Khanna (D-CA) for the program The Future of Britain. That show features interviews from around the world about how technology is changing the economy and society, as well as the impact of climate change. Rep. Khanna is the Chair of the Oversight Environmental Subcommittee, and thus an expert subject.

The interview was recorded on one of the days that the Select Committee to Investigate the January 6th Attack on the United States Capitol was in session, which meant that our team was on a tight schedule and had to set up quickly. The crew also had to prepare a Microsoft Teams call on the laptop so that the remote producer could interview Rep. Khanna.

This also meant that there was not a lot of time to shoot B-roll after the interview. But such are the common constraints when producing videos on the go, and MTI is always prepared to get the job done. 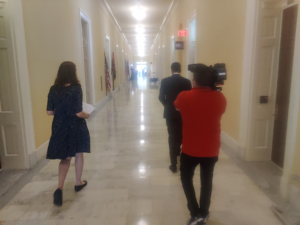 After the interview, Videographer Jamie Sides gets B-roll action shots of Rep. Khanna walking the halls of Congress.

The crew included Videographer Jamie Sides and Media Manager Patrick Young. Because Silverfish TV is based in London, the video was shot in 25p mode, which is the standard broadcast format in the United Kingdom and Europe. Of course, MTI has the equipment to handle this.

Despite the time and location constraints, the video crew turned in a professional product and the client was satisfied.