Post-Production Magic: When the Picture Must Change

Post-Production Magic: When the Picture Must Change

Sometimes the best plans can go awry during a video shoot and the footage captured is not quite what is needed for the final product. Perhaps there is a logo or image in the background of a shot that needs to be removed. All is not lost. Because MTI’s editor-of-choice Bill Parks knows some special secrets of post-production editing. 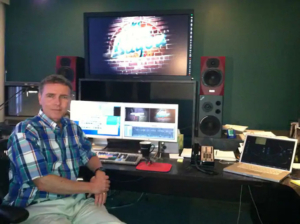 “A lot of times I’ll actually fix things that are wrong,” says Bill. The tool he uses to change what’s on the footage, what he calls the “big gee-whiz software,” is the same tool he has been editing with since the industry switched from tape-based production to digital: Avid Media Composer “That’s what Hollywood and the networks use.”

In fact, Bill has been using Media Composer almost since its introduction. He was one of the early testers of the then-radical program back in the early 1990s.

Media Composer cares, says Bill, about all the fine details that go into getting a great looking finished project. “As do I.”

Bill used his “touch-up” skills on the Emmy-nominated MTI documentary The Bayou: DC’s Killer Joint, to remove or blur certain visuals that did not meet PBS standards.

The usual way the technique works is to, for instance, put a dot on a nose and tell the software to track the face and then add a blur to the image. The computer calibrates those movements.

“If the white balance is wrong so that all the faces are blue,” notes Bill, “when you fix them back to red the background is now really odd as a result. And so you can track color-correction, as well, onto just the areas you want to [fix].”

Now It Can Be Revealed

One of Bill’s favorite fixes was when the talent to be interviewed cut himself shaving and showed up on set with a bright red mark on his face. No problem: “You can color-correct that red back to skin tone,” laughs Bill. “Never saw it again.”

Most recently, Bill was able to spruce up a church’s Easter broadcast. Because of Covid, the choir was recorded beforehand in the empty space for playback during the service. “We didn’t know what flowers were going to be used,” says Bill. “Those were added after the fact. The effect gets results even when the audience may not know it.”

Says Bill, “I get a chuckle out of that.”